She would like you to pray for her family

June 12, 2011 / Audrey Stewart / 0 Comments
Tweet
I seem to have won the preaching lottery this summer! This morning I got to preach for Pentecost Sunday at my childhood parish: St. David’s in Kennebunk; and next week I am preaching Trinity Sunday at my sponsoring parish, St. Paul’s in Natick! Here is my sermon from this morning:
It seems futile to sweep a bamboo slat floor in a dust-covered jungle, but that is exactly what she was doing when we arrived. It was a hot, humid day in January on a mission trip to Myanmar -formerly known as Burma- in East Asia. // Church let out that morning and my classmates and I were separated and sent to visits parishioners’ homes in the small village of Mwa Bvi, Myanmar. I was partnered with two Burmese bible college students in their early twenties and two Burmese high school students. They would serve as my translators. We walked for about fifteen minutes before coming to the first home. As we walked we tried to carry on a conversation, but their English comprehension -while extraordinary- was still slow and the exchange of ideas was hampered. I was nervous. //  No one told us what we would be doing. I assumed we were going to learn from people in the village about their lives as Christian minorities in an oppressive military-controlled country where the majority religion was Buddhism. 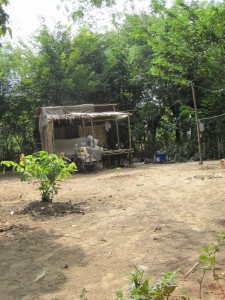 The home we arrived at was made entirely from bamboo apart from a thatch roof fashioned from palm leaves. It was on stilts two feet above the group to protect from flooding during the annual rainy season. A tiny, old woman was sweeping the floor in preparation for our arrival.
The woman was no more than four and a half feet tall; her body bent and broken from osteoporosis. She smiled broadly to welcome us into her home. We left our shoes on the ground and stepped up inside. I had to crouch to avoid hitting my head on the ceiling. It was a single room with mats on the floor. I sat down and the room quickly filled up with 5 children, 3 more adult women and an adult man. A forth woman brought in some tea and a cup was handed to me. Was I even allowed to drink this; was the water safe? The room was silent so I drank. The old woman smiled at me expectantly. I looked to my translators and they said, “She would like you to pray for her family.”  //
“When the day of Pentecost had come, the disciples were all together in one place. And suddenly from heaven there came a sound like the rush of a violent wind, and it filled the entire house where they were sitting. Divided tongues, as of fire, appeared among them, and a tongue rested on each of them. All of them were filled with the Holy Spirit and began to speak in other languages, as the Spirit gave them ability.”
Have you ever wondered what that “violent rush of wind” must have felt like? The selection from Acts says nothing about the feeling that the disciples encountered that day. It sounded like wind, like hurricane winds tearing through the house straight from heaven… but what did it feel like? Tongues of fire that rested upon them. Was it still? Could you see it? Or was it simply a feeling that suddenly invaded their bodies and graced them with the ability to speak and to hear? The text implies that the sound of wind tore down from heaven and invaded the home, appearing as fire that rested on the disciples. That sounds terrifying.
Pentecost wasn’t a lovely summer day or a walk in the park. Folks didn’t leave there saying, “Well, that was neat. I wish I could speak all those languages, too.” People were surprised, scared, in awe, confused, and inspired. The Holy Spirit, in all Her fury, rained down upon the people and the church was born.
Kind of makes you wonder, if the church started with such drama how did we get here? // The disciples were commissioned to spread the Gospel to all the corners of the earth, fire rained down upon them and they went forward in shock and awe proclaiming, and prophesying, and interpreting. And not just the twelve. As the book of Acts moves forward from this place we learn that men and women, young and old, jews and gentiles were blessed with gifts of the Holy Spirit that enabled them to carry Christ’s message into the world. //   Did the Holy Spirit just stop moving in the same way after this grand act from biblical times? 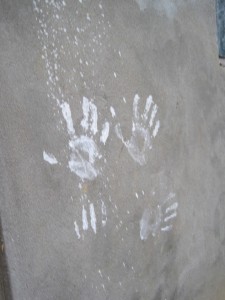 It takes intentional effort. In a world that is tied up with modern communication devises and scientific explanations for everything it takes intentional, prayerful contemplation to see the Spirit moving in the little things. But remember, Pentecost was an event unlike any other, the disciples had slow moving days when they had to look for the Spirit too.
I once heard a priest say that word of mouth is the greatest evangelical tool for growing the church. He went on to explain that Episcopalians were the least likely of any denomination to invite their friends to church which is a major reason that our churches are shrinking. Now, I am not sure where he got his facts, but it wouldn’t surprise me. The Episcopal Church is seen from the outside as an exclusive club. When newcomers enter our doors they discover the need to juggle multiple books, learn special hand signals, and sing out in a culture that tells them keep their songs to themselves. //  //  //  Pentecost is the day when God sent God’s Spirit down to tell them to take their hope as Easter people out into the world. Each year we celebrate Pentecost as our common call to be witnesses of Christ’s redeeming love in the world. What about being witnesses even with our neighbors and friends?
So, where is the Spirit raining down in your life? We don’t receive gifts of the spirit so we can be better at the things we are doing; we receive them so that we can go forward to do the work God is calling us to do. Oftentimes, that work is scary. It is something we could not have imagined on our own. And it is something that we feel in the very core of our being that something other than ourselves is willing us forward. 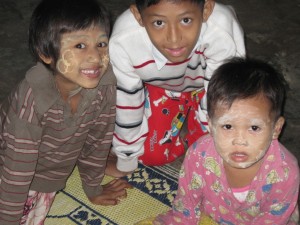 When I went to Myanmar in January I went expecting my heart to be broken open for the people there and for the plight they were facing. I went already planning my next mission trip to Tanzania for this summer. I went telling the Spirit what I expected to get out of it. //  Those are the times when God laughs the hardest; when we tell God our plans. // If you had told the disciples that the Holy Spirit was going to rain down fire upon them and they would instantly become multi-lingual evangelists for the Gospel of Christ, they would have laughed. It seems that despite all of the amazing things they witnessed during their time with Christ they still thought they had it all figured out. //  Myanmar broke my heart open, but in ways I wasn’t anticipating or ready for. //  This summer I will be living in Maine. I am not going to Tanzania; the Spirit told me that I wasn’t supposed to go on that trip.

The Spirit is a funny thing. She comes into our lives when we least expect her, and like hurricane winds whipping through the house, She tends to disrupt everything in Her path. Because everyday can’t be like Pentecost, the major difference for us from what the disciples faced that day so long ago is that we must intentionally focus our hearts on hearing the rustling wind of the Spirit in each moment of our lives.
The old woman smiled at me expectantly. I looked to my translators and they said, “She would like you to pray for her family.” I didn’t know this woman or her life. I had only been in the country for 24 hours and was already experiencing major culture shock. I was tired and overwhelmed.
I closed my eyes, breathed deeply, and asked the Spirit to enter my heart. Then I prayed. //  // //  I have no idea what I said that day. I felt inadequate and unqualified, but then I remembered Jesus telling his disciples not to worry about what they would say for in that moment the words would come to them. // It seems that in that moment, prayer became the Pentecostal, universal language. // I pray that we can going forward using this universal language to share the good news that has been gifted to us. To share it with our neighbors and friends. To invite them to our church. And to open our lives to the transformative power of the Holy Spirit.//