A year of firsts

October 29, 2012 / Audrey Stewart / 0 Comments
Tweet
Last Friday I had the distinct honor of officiating my first funeral. The preceding Tuesday Thomas came into my office and asked if I could do the funeral on Friday. I internally freaked out which obviously (obvious for those who know me) means my terror probably read loudly on my face. He explained that it was a “perfect” first funeral. The gentleman who had passed away was in his nineties, a WWII war hero – in short, a lovely man with a great family. Neither Thomas nor myself had had the chance to meet him. I agreed, but was definitely scared. Thomas was great and we talked through the service and some pointers and then it was in my court.
I met with the man’s daughters and they were amazing. Really incredible women who helped me get to know their dad through stories and anecdotes. I also had the advantage of watching a video that the local paper shot 3 years ago when they were writing a story about his life, focusing on his service in WWII. I got to hear him tell his own story and that was a gift beyond measure. At home as I prayed about the readings and how they would work with the homily it I felt the Holy Spirit dancing through the stories his daughters had told me as they wove so effortlessly in with the text.
When Friday arrived I was terribly nervous. I am easily influenced by the emotions of people around me and I wanted to make sure I was going to embody the clergyperson this family needed me to be. It was my prayer to be invisible in an odd way. That liturgy – any liturgy – is not about the officiant. The officiant is there to lead the people in prayer and to offer those prayers to God. That morning I prayed to be a container that could hold the prayers of God’s people just long enough to join them with my own prayers before releasing them up to God. 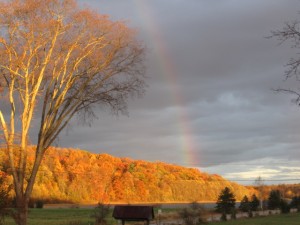 Something strange happened during that service: sometime after I stopped stuttering and tripping on my cassock I began feeling confident. I was still nervous, but I knew I could do it and what’s more than that: I knew I was meant to do it. At the close of the burial service at the cemetery, I said the dismissal and then walked through the crowd. Just then the army corps bugler began playing taps. I turned around and watched the crowd standing there in silence as the autumn leaves showered the family and danced around in the wind. In that moment I was grateful for the beauty of the day and the gift God has given me in the form of this calling to priesthood. I was so glad that this family had a positive experience with this liturgy and that in some small way I was able to be with them in their grief. This period of transitional diaconate is an awkward liminal time but the gift of moments like these help me to focus my eyes on the horizon and to realize what an odd and fabulous vocation I have.