The parable of the lost camera 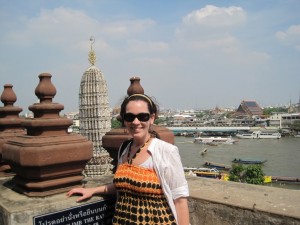 (atop Wat Arun in Bangkok, the day before we left for Myanmar)

This is a story about humility, friends, shared humanity, gratitude, and hope.
Humility
There was a woman who had grown up in Maine and had a dream of seeing the world through her own eyes and bringing that world back to share with those she loved. Finally, the opportunity came to engage in mission in the far off land. The woman had followed God’s call to a seminary in Virginia and from that seminary she would travel to meet God’s children in Myanmar. The woman was thrilled and grateful for all of the people who supported her so that the opportunity was possible. So the woman from Maine flew to Thailand and brought along her trusty little camera so she could bring the world home withher. She took pictures of everything she saw: the people, the trees, the fruits, the animals. All of the mundane beauty was captured so that she could show this new world through her own unique vision.
Then the time came for the true mission to begin. The woman traveled with her friend to Myanmar. They flew to this country were few others from home will go. The need for images became even more important to the woman. As soon as the group arrived in this far-away land, the woman was struckby the “otherness” she perceived. One of her goals was to look beyond the “otherness” to identify and capture the shared humanity of this place. She took out her camera and began what was to be a month in search of mutuality. 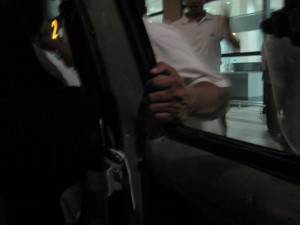 (The taxi driver pushing the cab to get it started)
The journey had been long and the culture shock had already begun to sink in. After dinner with her traveling partners the woman retreated to her room to journal and she turned to her camera for the images from which the words would be born. Alas, the camera case was empty. She calmly, but meticulously, searched her belongings. With a thud of recognition she remembered an audible thud from the taxi ride. What she had dismissed as simply her water bottle falling to the floor had actually been her beloved camera: her parter in memories and communication. You see, the woman has found that she appreciates capturing the simple beauty in the everyday, and photography is her means of communicating that beauty with the world.
A friend from her group helped to confirm that she had not overlooked the small piece of electronics:it was gone. In a final effort checking the hotel lobby, the night manager of the hotel asked what was happening. The woman explained,with tears beginning to well in her eyes, that she had mistakenly left her camera in the taxi and if it was returned to please call her. The woman than went to her room where finally, after a long day of travel, she began to cry. And that is where our story begins.
Friends
Shortly after returning to her room the woman received a telephonecall from her trip leader asking for a description of the camera and where in the taxi it had fallen. The trip leader explained that the night managerwas moved by the woman’s tears and was trying to track down the taxi. (Now, you must understand: Myanmar taxis are not like US taxis. There is no radio, no meter, this taxi even had to be push started on the journey from the airport.) With some words of encouragement she hung up the phone. Daring not to hope, the woman continued to unpack and organize her belongings while kicking herself for her oversight. A couple hours later, close to midnight, the phone rang again. The woman was exhausted, but unable to sleep. She walked to the phone and answered. It was the soothing but tired voice of the trip leader, “I have just returned from the airport with the night manager. Your camera will be returned tomorrow morning at 8:00. Try to get some sleep now.” Stunned, and unable to form coherent sentences the woman simply said, “Thank you, I think I can now,” and hung up the phone. The next morning at breakfast the woman found the trip leader sitting alone. She sat down to join her and the trip leader calmly regaled the tale from the night before:
Shared Humanity 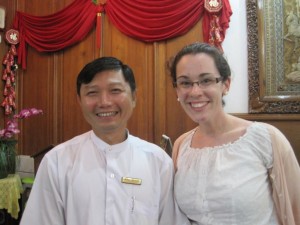 (The night manager of the hotel in Yangon)
“After you returned to your room last night I got a call from the night manager telling me what had happened. He explained that you looked very upset and he was trying to track down the taxi number. He asked which taxi, what your camera looked like, and where in the taxi your camera fell. A short while later he called me again and told me that the guard stand did have the taxi number and he was going to the airport to look for the taxi. I told him to wait because I would go with him…” She continued to explained that they hailed a taxi and negotiated a rate for the night. They went to the airport and found the gates closed and locked: the flight the group was on had been the final flight in that evening. -This was good and bad news because it meant the taxi driver likely had no other fares, but it also meant the taxi driver had gone home. They drove to where some of the airport taxi managers were and learned where the taxi manager for the international terminal lived. They traveled to his home.
It was a road in poor shape with many dilapidated houses and huts lining the street. They pulled up to one and the night manager went to knock on the door while the trip leader was asked to wait in the taxi. The night manager explained to the taxi manager what had happened. They spoke for several minutes in Burmese and the taxi manager glanced back at the cab where the trip leader waited. After a long while the night manager returned to the car with the airport taxi manager and gave an address to the driver: they had the address for the taxi driver.They traveled further down the dark, difficult road to another modest home. There, in the driveway, was a van with a cracked rear window: this was it. The night manager and the airport taxi manaer went and knocked. No answer. He knocked harder and louder. Eventually atired looking man opened the door. It was him. The three men spoke for a long time. The trip leader waited in thecar wondering what was happening. After several long minutes they returned to the car and the taxi driver retired to his home. The night manager said that he had the camera and would bring it to the hotel at 8:00 the next morning. The trip leader said that she tipped the driver who had brought them around the night before witha crisp $20 bill and that was that.
Gratitude
The woman sat speechless for a moment. A man whom she had nevermet and her trip leader, who had been just as jet lagged and exhausted as she had been the night before, had spent hours traveling all over Yangon in search of a simple camera that the woman had foolishly dropped. She was humbled and very grateful. She thanked the trip leader in the only words she could find at that time. After a moment, the woman realized how close to 8:00 it wasand she gathered herself to ask how much would be appropriate to tip the man who was coming with her camera. And that, the trip leader explained, led to the rest of the story:
She began to tell the story of two parishioners who entered hospice care just before she left on this mission. One of the people, a kind and joy-filled soul, was in care in Bangor -several hours from her home. The week before she left, the trip leader traveled to Bangor to administer the Sacrament and to visit. Before she left he gave her an envelope with a crisp $100 bill inside. This was not a man of great means; this gift was tremendously generous. She asked about it and he told her that he wanted her to use the money for an unanticipated expense on her trip. He wanted her to use this money for something important and that was he could travel all the way from his hospice bed in Maine to Myanmar with the group of seminarians and their leader: a beloved parish priest from Maine. The night before the trip leader had used some to tip the driver who traveled the dark streets. She used a portion to tip the amazing night manager who went above and beyondin recognizing a burden and deciding to alleviate it. And this morning, she handed another crisp bill, a portion of the man’s great offering, to the woman and said, “He would want you to use this.”
Hope
Literally, just then, the front desk workers told them that the taxi driver was there. The woman and her trip leader went to the parking lot. The man was humble and timid as he approached the woman. She had a broad smile on her face and fought tears as she reached out to shake his hand. Instead, he pulled the small, blue camera out of his pocket and put it in her hand. He looked her in the eye for only a moment and then looked at the ground and backed away. She said “thank you so much” as she reached out her hand again to shake his. This time he smiled broadly. His teeth were stained with beetle nut and his eyes crinkled at the sides as he shook her hand. She then handed him the crisp bill and again thanked him. His eyes widened at the sight of the bill and his smile grew wider. The taxi driver and the airport manager got back in the van to drive away when they were waved back by the trip leader and the woman. “Can I take a picture with you?” she asked. 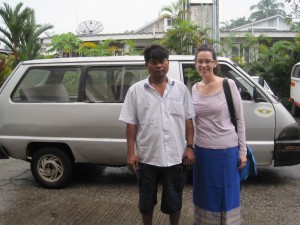 (The taxi driver from the airport)
Epilogue
There is so much about this trip I am still processing. If you know me at all, you know that it takes me a lot of internal time to process events before I can find the words to express accurately how I feel and see the world and my experiences therein. (Once I process, as evidenced above, I am rather verbose. *grin*) My camera is the way I capture future words. They say that a picture is worth 1,000 words. In my case this is more than true. Myanmar contained learning that Icannot yet verbalize. Learning that is vital for my formation as a minister in the church. I formed relationships, felt new feelings, breathed the Spirit, and met Christ in an entirely new ways. The gratitude I feel for The Rev. Kitty Babson (our trip leader), Khru Maung Sau (the night manager of the hotel), the modest taxi driver, and Kitty’s generous parishioner can only be expressed in the imagescontained in the 4,000+ pictures I returned home with on my camera. 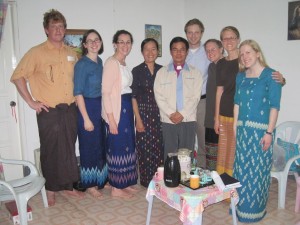 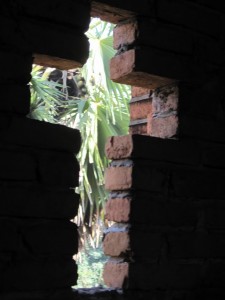 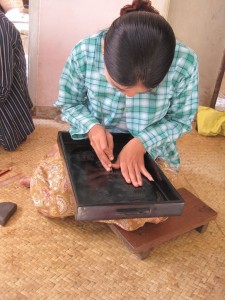 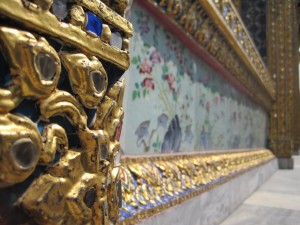