Someone has to do it. All of the running blogs and articles tell you that you “most likely” will not finish last when you race. Well, this morning I went and ran a 3.59 mile trail run with only 45 other people. As soon as I saw how small the field was, how BIG the hills were, and the crazy people in shorts and pro running gear running up and down hills for a prerace warm-up I knew there was a very strong likelihood I could actually finish last.

My friend Jane and I started in the back of the pack. With every steep downhill I went back to elementary science and thought: What goes down must come back up. Man alive, the second half of the course was going to be BRUTAL! I kept pace with Jane for the first half of the run but then I needed to back off. My lungs were on fire and running up the hills was not going to happen. I ran on the flats and downhills (which were becoming fewer and farther between) and walked up the hills. But not once did I feel badly about my position. I knew I was pushing myself as hard as I could. The last thing I needed to do was go and have an asthma attack in the middle of the woods – and the whistling in my lungs warned that was a distinct possibility. There were 3 of us at the back of the pack. I could see Jane ahead of me and one other girl a little further ahead. I joked with the officials positioned around the course that “I was making sure everyone made it out of the woods safely.” I listened to my body and pushed it even when I thought I couldn’t but knew it was safe to try.

There have been a lot of articles recently about back of the pack runners questioning if we are committed or even “real runners.” It feels a little like the questions I fielded when I was a transitional deacon. To be honest, while it is a little frustrating to know that these elite runners feel the need to comment about what may or may not be motivating runners like me, I really don’t care all that much. I will never be competing for a first place medal – and that’s okay. I am competing only with myself. I am competing to be better than I was yesterday. I am competing to use the body God gifted me with. That’s all – and that should be enough. I am no threat to the elites and I see no reason why it’s become so important for some people in that high bracket of runners to discourage a new crop of runners who might never run a 3 hour marathon (or run a marathon at all!), but who are getting off the couch, making their lives healthier, and inspiring others to do the same.

As I trudged up the hill to the finish line this morning I laughed at myself as I repeated over and over in my head: “and the last shall be first.” I felt like I finished first as I looked down the hill and realized that I had done it. (I know that’s not what Jesus meant when he said it, but he doesn’t mind that I took the scripture out of context – I checked with him.) I don’t know my split times because my running app froze during the race – but that’s okay because I completed my goal: I finished. 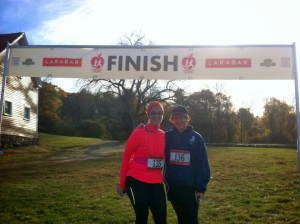