June 21, 2012 / Audrey Stewart / 1 Comment
Tweet
Yesterday morning a video of a 68-year-old school bus monitor, named Karen Klein, being bullied to tears by a group of middle schoolers went viral. It was a horrible video and showed how a mob mentality takes over. Kids, some of whom are likely very nice in other situations, joined in taunting and ridiculing the senior citizen who has given 20 years of her life to that job. The comments I saw from people sharing the video ranged from suggesting that the children involved “never should have been born,” to criticisms against the parents, to cries for emails to the school district. But there was one response that made my heart soar. A 25-year-old man in Vancouver started a fundraiser online to hopefully raise $5,000 for the woman to take a vacation. When I donated a small amount the total was already at $20,000. As I write this post the campaign has collected almost $350,000.
While it makes me happy that so many people were moved to help Ms. Klein, I can’t help but feel sad that there are other causes in desperate need of funding that cannot seem to get folks to put their hearts behind. Helping the victims of genocide in Rwanda, assisting orphans of the Iraqi war, local homeless shelters, food pantries, job assistance programs for the unemployed, saving victims of human trafficking, under-funded school districts, the list goes on and on. Globally and locally there are so many causes that could do so much good for so many people with a quarter of a million dollars. According to thewaterproject.org, $7,000 can build a clean water well in an African village. Last fall I helped raise $12,000, which will build a medical clinic in Myanmar. So why is it that we can raise almost $350,000 in a 24 hour period for a woman who was cruelly bullied at work while we have to continuously campaign and strive to collect money to aid the homeless men and women who live right down the street from us? 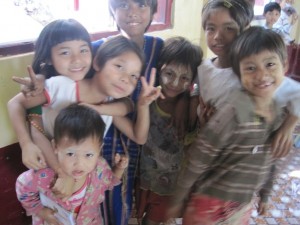 I think it comes down to who we relate to most. In Karen Klein people see a woman who could be their friend, neighbor, mother, or grandmother. We are horrified by the punishment she endured and the grace with which she handled it. She certainly deserves a gift and support. But I question what we are learning from this massive showing of charity?
I truly wish that we could relate as easily to the homeless woman seeking shelter in the park, the dehydrated young man tilling a field in Africa, or the Thai teenager who was sold into the sex trade when she should have been finishing high school. I still believe that human beings are intrinsically good, but I see so many ways that our Western, middle class upbringing makes us out of touch with the rest of the world and the rest of Christ’s body.
Keep in mind: I donated to the campaign for Klein. I think it is a wonderful thing that we want so badly to help this woman. What I am pondering this evening is how we can use resources like this to raise awareness and support for causes more far reaching. People were invited to donate as little as $1 to the campaign for the bus monitor. Most of the donations that are tracking are between $5-$20. The power is in the number of people moved by the original video. I pray that people might be able to see the power we have when we work together. Global problems like homelessness or starvation seem too large for one person to fix, so we often give up before we start. What this campaign teaches us is that we can change the world one person, one dollar, one heart, and One body in Christ at a time.