Opportunity to Choose – a sermon for the first Sunday in Lent

There was recently a social experiment shared through a video online.  For 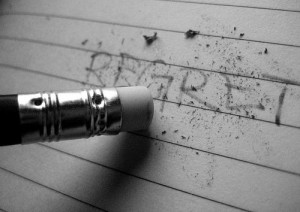 one full day a chalk board hung on a fence in NYC with the question: “What is your biggest regret?” written across the top. Throughout the day passersby were invited to take a piece of colored chalk and write their regret on the board. No one was interviewed; the organizers never even learned the names of those who wrote those intimate thoughts on the board. At the end of the video they highlighted that a majority of the “regrets” started with the word “not” – they were chances not taken, paths left unexplored, etc… The board was littered with what ifs…[1]

I found the video interesting and shared it to see what response it might get from others in my circles. A high school classmate engaged the question and asked another in response: What if the question they explored was phrased as a positive rather than a negative? What if they asked folks what they didn’t regret in life? Would they get the path that lay opposite from the “regret?” The path that was taken?

And that has made all the difference.[2]

Did Jesus regret the road not taken?

We learn in our Gospel lesson for this morning that Jesus was led by the Holy Spirit into the wilderness to be tempted by Satan immediately after his baptism in the River Jordan. This marks the beginning of his ministry and I can’t help by think that Jesus might have hoped for a better “first assignment.” What other opportunities were in front of him at the time? What did he have to say “no” to in order to say “yes” to the Spirit’s leadership?

That’s the thing, isn’t it: Life is full of choices. In order to backpack Europe for a year after college one has to forego the internship at the prestigious company that will set you up for the future. In order to stay home caring for the ailing parent one has to pass up the opportunity to finally have an empty nest after 18 or more years of a full house. In order to become what we are called to be we have to make a hundred choices a day – and sometimes we will wonder what would have happened if we went the other way.

Once Jesus enters the wilderness his time of decision-making is far from over:

Even after Jesus “passes” every test, the last line of our passage says the devil only “departed from him until an opportune time.” (Luke 4:13) This implication that these trials were not the end of Jesus’ temptations on earth fly in the face of what is commonly assumed about Jesus – that he was immune to temptation in his ministry after the desert trials. But if we look to the Jesus of our scriptures: sometimes angry or hot headed, expressing frustration, retreating for communion with God – we find that our Lord was truly fully human AND fully God – he faced the temptation of decision-making just as we do.

When we come to the divergent paths in the woods we always must make a choice – it won’t always be a cut and dry, right vs. wrong decision. There are many times that we must choose between two good things. There are times when we must choose between the known and the unknown. There are times when we must chose between action and inaction; silence and busyness; companionship or desert times. Lent is a season when we choose to make choices aimed at bringing us in closer relationship to God – saying no to distraction and yes to spiritual practices. Why is it that we need a season of invitation to do this?

Probably because the temptation is too great and we need an annual reboot to remind us to: turn our hearts away from sin and towards our God. (Acts 3:19)

As we talk about turning our hearts we cannot forget that today is Valentine’s Day. But rather than making each of you a construction paper heart edged with lacy doilies, perhaps instead we should consider the life of the Saint from whom this day is set aside. There is not much reliably known about the Saint aside from the fact that he was martyred on February 14th, likely in the year 269.[3] The popular story goes like this: 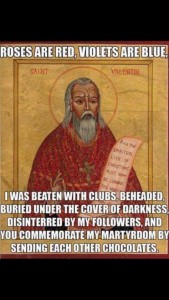 Saint Valentine was a Roman priest at the time when Emperor Claudius was persecuting the church in a variety of ways. Among the persecutions against the people was Claudius’ edict against the marriage of young people. Claudius believed that young soldiers in the Roman army would fight more bravely if they were not worried about wives and children back home. Thus, Claudius condemned the sacrament of marriage for all men of fighting age. Valentine believed that Claudius was overstepping his bounds and continued to marry young Christian couples in secret. Claudius learned of this and flew into a rage. He summoned Valentine who tried to convert the emperor – this further upset the emperor and Claudius ordered Valentine tortured and imprisoned to stand trial for his crimes.[4]

When it came time to stand trial, a man named Asterius was assigned his judge. Asterius’ daughter was blind and legend has it that Valentine prayed for Asterius’ daughter and she was healed of her blindness – causing Asterius to convert to Christianity. Eventually, Valentine’s trial resumed and he was sentenced to a three-part execution of beating, stoning, and finally decapitation.[5]

Just makes you feel all warm and fuzzy inside – doesn’t it?

It is rumored that the last letter Valentine wrote was to the Asterius’ daughter and that he signed it: From Your Valentine – inspiring the tradition of sending love notes to one’s significant other on Valentine’s day.

“What Valentine means to me as a priest,” explains Father Frank O’Gara, “is that there comes a time where you have to lay your life upon the line for what you believe. And with the power of the Holy Spirit we can do that — even to the point of death.”[6]

Usually when we hear that someone is full of the Holy Spirit it is a time of joy, mystery, and wonder. Yet in the example of Jesus and of Saint Valentine we learn that the power of the Holy Spirit can inspire us to walk in the path laid before us, even when that road is challenging or long. The question the experiment leaders in New York City asked was wo 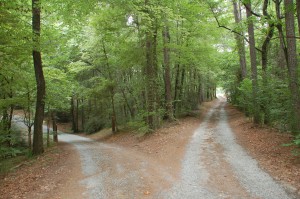 rded in just the right way to get the answer they were seeking. If I were to do the same experiment I would ask: “How have your regrets been redeemed?”

When asked in the negative we can all come up with decisions we’ve made that we wish had gone another way – but without each of those choices we would not be who we are today. This Lenten season, we have the opportunity to be intentional about the choices we make and the pathways we follow. What will influence the choices you make?

And that has made all the difference.[7]

[2] The Road Not Taken by Robert Frost

[7] The Road Not Taken by Robert Frost